Fortunately my flight out of Istanbul wasn’t all that early, but I decided to try and get an early start to “enjoy” the Turkish lounge, crowded as it usually is. It’s a good thing I did, because traffic was nightmare-ish this morning, and took well over an hour to get to the airport. Due to that, it was also going to be much more expensive than on the way in. I had 74.60 lira on me, and prayed it wouldn’t go over that. I had some dollars and euros as backup, but didn’t want to get in a negotiation.

Pull into the business class check in and the meter reads? 74.32 lira. Obviously, I’m doing something right! w00t for that!

Business class checkin was quick with zero line, as was passport check and security.  I was curb to lounge in 15 minutes max…for once Istanbul airport is redeeming itself to me.  Of course, the lounge was mildly packed, but I not only found a seat, but one with a power outlet.  This day keeps getting better and better,   Time for a snack!  Mmmm…baklava!

Soon, it was off to the gate. Boarding only started 20 minutes before departure…this was not looking good…except…upon boarding it was “new” style A321 barcalounger business class…and only 3 of the 16 seats were taken. I’m obviously living right today!

I was glad to see that even though the flight was shorter, and with real seats, we had the chef again!  Hahhahaha!

Taxiing to the runway we passed this Pakistan Air Force plane…anyone know what it is?

So, what’s to eat today?

All in all, another well above average Turkish meal.  I’ll also confess once again, I like their Turkish wine.  Not only do I find it tasty, the staff always seems excited when I like it over the French alternative.  I may have had a bottle or two.  Or three.  Who can count.  We’re headed to Russia, where such things don’t matter.

So yea, for once Turkish delivered on all fronts, which when they do it, they do an awesome job!  Soon, we were landing in super cold Moscow.

Now, a bit of a prelude.  See, the first time I ever left the US and Canada was in 1988….when I headed to the Soviet Union.  I haven’t been back since, and now 143 countries later, I was back in Moscow, almost exactly 25 years to the week later.  I was excited to see how things have changed.  I know I’ve certainly changed a lot in that time.  A few shots upon landing at Vnukovo: 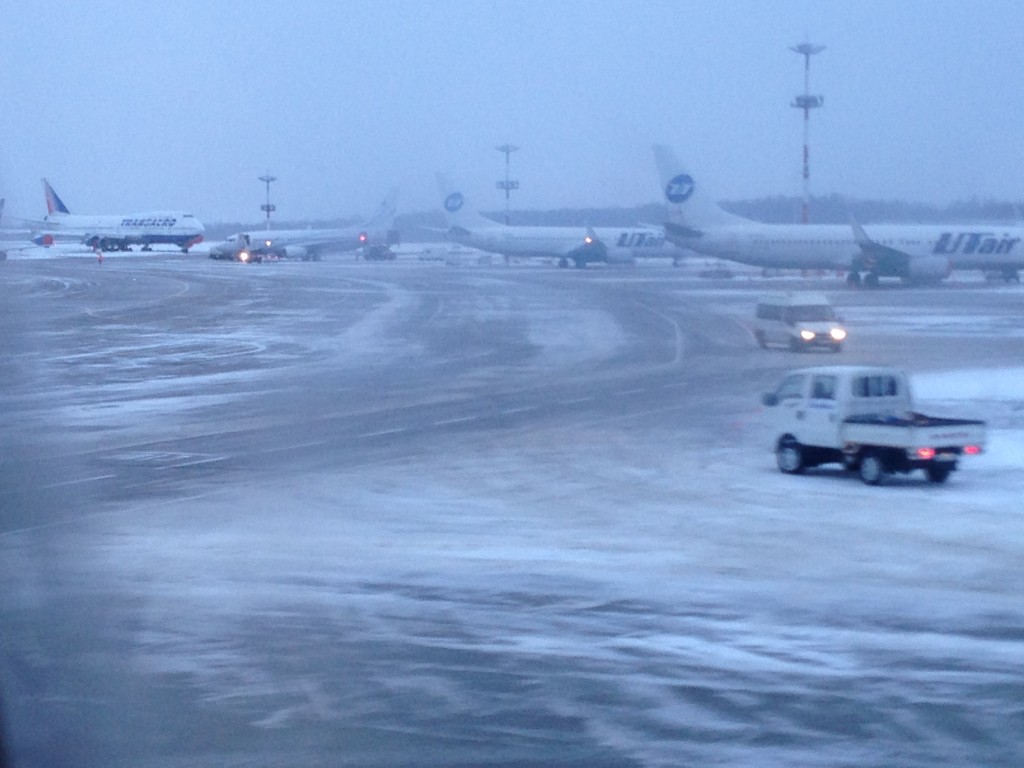 Immigration was a relative breeze, except when he asked “why did you say on visa application you’ve never been in Russia?”  “Well, um, I’ve never been in the Russian Federation…only the USSR, so I thought that was the right answer.”  He was ok with this, and by the time I got to baggage my bag was there.  Out of customs, and my driver was waiting, for what turned out to be the FOUR HOUR drive to my hotel.  Yes, hello Moscow traffic, four hours.  ARGH.  Fortunately, he was a company driver and not on the meter, but holy yuck.  Of course, this was at 5p on a Friday so maybe that’s why, but still!

Now, a few thoughts on my hotel, the Sheraton Palace.

Staff:  Amazing in all ways.  Upon figuring out I spoke some Russian, the check in ladies refused to speak English.  They slowed down their Russian, worked to make sure I understood everything, and genuinely wanted to make me practice.  It was awesome, and they really made an outstanding first impression on me.  Especially when they asked if it was my first time in Moscow, and I told them “Moscow, no, but THIS Moscow, yes…I have not been here since 1988.”  Housekeeping I can’t comment on, because I took the green choice for points, so didn’t need their help.  The lounge staff?  What can I say…simply outstanding.  The lady work worked every night I was there was happy trying her best in English to help guests, but was thrilled to help me practice Russian too.  Even the doormen were awesome on the occasion I needed cabs.  Honestly, some of the best hotel staff I’ve encountered in my 145 countries of travel to date.

Room:  Again, awesome.  Upgraded to a junior suite, with a fantastic rain shower, AC that keep the room a nice cool 19C, and nice and speedy wireless internet.  Honestly, couldn’t have asked for more.  It was great.

Gym:  Quite good, and definitely above average for a hotel gym.  Plenty of cardio equipment, and a better than average set of weights.

Food:  Can’t comment, as I didn’t eat in the hotel restaurants.

Lounge:  Amazing, amazing, amazing.  As I mentioned above, excellent staff.  I’ll also confess, that several nights I actually made dinner from the snacks in the lounge.  I mean, check this out:

Every night there was some kind of grilled meat, or meatballs, or something that constituted a significant protein.  Combine that with a glass of wine, some cheese, and a lil carbs, and everything was there to make an adequate dinner.

Location:  Again, awesome.  Right on Tverskaya Ul. a short walk from Byelorusskij Station/Metro, Starbucks and a grocery store across the street, and Red Square a 15 minute walk away.  Outstanding.  There’s no doubt I’ll be staying here my next time in Moscow as well.

Next up, and this may take a few posts, my thoughts of Moscow, 25 years later.

3 Responses to “Istanbul to Moscow Vnukovo on Turkish in business, and the Sheraton Moscow”

This site uses Akismet to reduce spam. Learn how your comment data is processed.