I wasn’t really expecting this daytrip to leave at 6:30am…it’s probably a good thing I didn’t know that in advance, or I might not have booked it.  I was beginning to seriously run on fumes by this point in the trip, but hopefully seeing Lake Titicaca would make it all worth it.  I had to admit, though, as anyone who wasted time watching Beavis and Butt-head as a kid, every time I hear Lake Titicaca I still think of the Great Cornholio…lol

Anyways, enough stupidity. Got to the lobby of my hotel at exactly 6:30, and there were no signs of life stirring yet. There was, however, a petite Bolivian looking lady wandering the lobby looking puzzled, so I asked who she was looking for. Yes, she was my guide…and the driver was on the way. This was all in Spanish, because up until this point she seemed extremely reluctant to speak English. She eventually warmed up, and we were underway.

It was about a 90 minute drive to Huatajata where we would pick up the hydrofoil across the lake.  Although this was scheduled to be a group tour, there was nobody else booked from La Paz today, so I’d have the van to the hydrofoil all to myself.  Additionally, the hydrofoil ride would be all alone, and we would pick up a large group of…you guessed it….Swiss tourists coming from Peru in Copacabana for the second part of the trip.

We made it Huatajata on time, after a long drive through the sprawling expanses of El Alto.  Once there, there was a “museum” to see before starting the trip.  When I was booking this, I discussed with several Bolivians I knew, and they all recommended to make the booking with Crillon Tours.  Seems they had built much of the tourist infrastructure on the lake, including the hydrofoils, and had all the connections to make the trip the best possible.  They’d even built a museum on Huatajata telling a bit of the history around Lake Titicaca, both before and after the arrivals of the Spanish.  I was given 20 minutes to check out the museum while my guide got everything sorted for the hydrofoil. First highlight of the museum, a burial mummy: 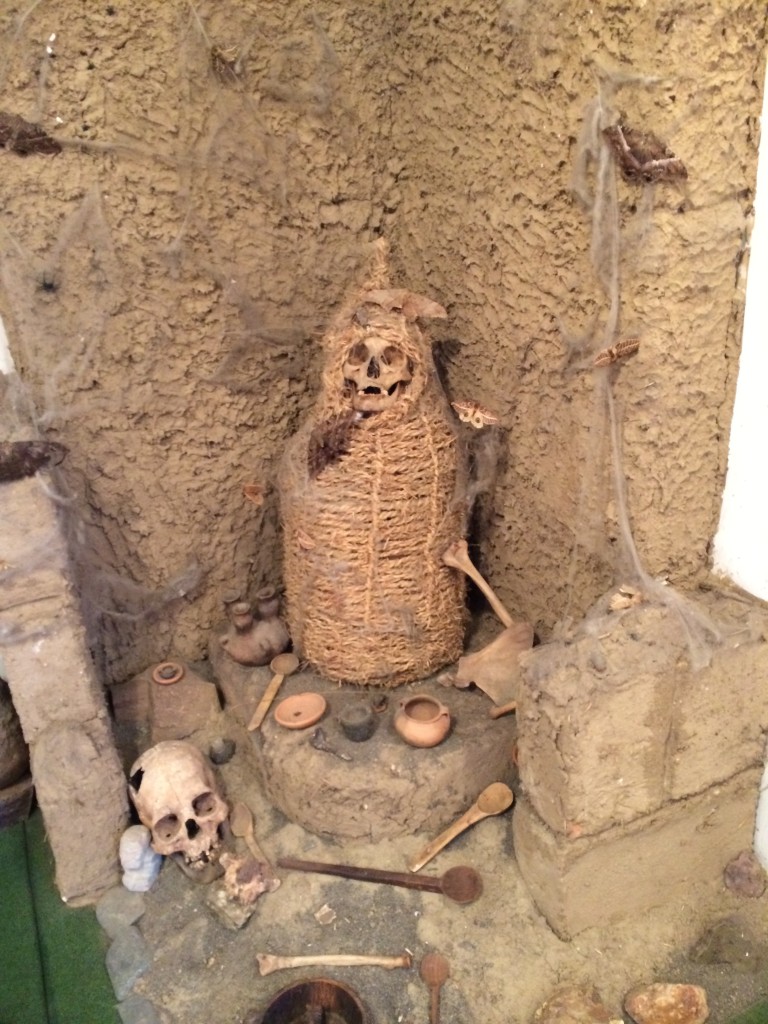 …followed by the arrival of the Spanish:

Manco Capac, the first Incan incarnation of the Sun God, and his sister and Mama Ocllo in a traditional boat….

Outside the museum were some friendly alpacas (or are they llamas?)  just hanging around….

…and one especially woolly one in bad need of a haircut.  Lake Titicaca in the background:

There was also a cuy (guinea pig) hanging around….

Our hydrofoil, the Sun Arrow, set to take just me and my tour guide on an approximately 90 minute trip to Copacabana over the lake.

We boarded, and there was lots of room to spread out…

The routes of travel….at different points on the cruise the individual lights would light up:

After docking in Copacabana (at a small naval base…see, Crillon Tours really does have the infrastructure sorted) we took a walk of the town while waiting for the giant bus of Swiss tourists to arrive and join us.  The entrance to the main cathedral:

After the cathedral we walked the town for a bit and grabbed a coffee.  The town was crawling with backpackers, probably more so than anywhere else I’ve seen in the world.  It was actually mildly disappointing – the number of coffee shops, hostels, and cheap tourist shops was really unattractive (although with the constant cries of “hola!  senor!”, but fortunately the natural beauty of the lake really made up for it:

At this point we walked back to the boat, and an hour later, around 1pm, the Swiss finally arrived.  Their tour guide took over (we were outnumbered 30 to 1) and gave all the narration on the boat.  In German.  Fortunately, we were sitting by one of the francophone swiss tourists who was translating for others, so I didn’t miss too much I think.  The next stop was the Isla de la Sol, or Sun Island.  We took a hike to the top (which the Swiss skipped….it was close to 200 or so steps at 14,000 feet in altitude, and at the top was a spring from which flowed the “fountain of youth.” I had a drink…we’ll see if it works!

The view down towards the lake from the top of Sun Island:

Lunch was serve on the island, and it was an absolutely gorgeous view.  Lunch was quinoa soup, lake trout, and a mandarin.  Pretty tasty…and the views….

There was even a replica traditional reed boat out on the water was we had lunch:

After lunch, it was back on the hydrofoil for the final stop of the day, the Island of the Moon.  The view as we docked:

Ruins of the temples on the Island of the Moon:

From inside the ruins…this picture was much more impressive in higher resolution when you could see the moon.

The great thing about having my own guide, while the swiss wandered around en masse, is that we could get ahead of them, really explore things in detail and at the pace I wanted to, and have things mostly to ourselves.  While they were still exploring the temple ruins, we headed back down to the shore and I got to enjoy the views of Lake Titicaca:

After this, we took the hydrofoil back to Copacabana, arriving around 4pm.  The swiss headed out in a giant tour bus to their next stop, and it was just me, my guide, and my driver in the van back to La Paz.  We stopped a short way out of Copacabana to take a few last pics:

Then, after 45 minutes we had to cross the lake.  Something about this “ferry” didn’t inspire confidence in me:

Fortunately, we made it across.  The late afternoon view from the other side:

As soon as we got to the outskirts of El Alto, it became bad.  Really bad.  I’m talking about the traffic.  What should have been approximately a 3 hour drive turned into nearly 5 hours, and we were still crawling towards the hotel.  I gave up, since we were near the Cuban place I’d had lunch the day before, and asked them to just drop me there.  I’d grab a taxi back after dinner when traffic was hopefully quieter.  I think I just wanted another delicious cuban sandwich and a few mojitos:

The restaurant, like so many places I went in La Paz, had this sign on display.  I’m guessing it’s some local regulation that all public establishments must remind people that “under the law all are equal.”

Back to the hotel with a taxi driver intent on winning the Indianapolis 500, and off to bed.  I had an early flight to Lima and then on to Medellin in the morning!

One Response to “Daytrip to Lake Titicaca, Bolivia”

This site uses Akismet to reduce spam. Learn how your comment data is processed.